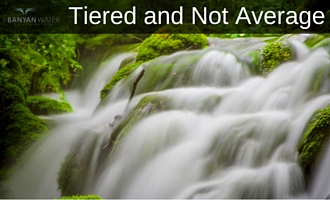 Looking at water bills every day from across the country, a clear and simple truth emerges. There is no such thing as an “average water bill.” The truth is, from Seattle to New York and from Florida to California, utilities are using different billing structures and experimenting with ways to cover their costs while providing water to their users. Even savvy commercial water users don’t always understand exactly how they’re being billed for water or why their utility costs are increasing, even as they strive to conserve water.

Variation in pricing modules means there is no average water bill.

Why are water costs and billing structures changing?

Contrary to popular thought, drought and increased demand aren’t the primary drivers in rising prices. Those forces are only a part of the issue. Even cities like Seattle, Portland, Tampa and Chicago – cities largely unaffected by drought – are seeing water rates rise. In fact, these cities have been plagued by more than 100% rate increases since 2001 (USA Today).

The factors driving increased water prices are wide-ranging and include:

According to the American Water Works Association, “restoring existing water systems as they reach the end of their useful lives and expanding them to serve a growing population will cost at least $1 trillion over the next 25 years, if we are to maintain current levels of water service.” Those costs have to be covered in some way and many utilities are passing on a portion of those costs to customers.

Water safety standards in our country are constantly being updated, causing utilities to adjust and upgrade systems to keep up with current standards.

According to the Census Bureau, “Between 2014 and 2060, the U.S. population is projected to increase from 319 million to 417 million, reaching 400 million in 2051.” This increasing population needs an ever-expanding water system to support it.

Changing climate patterns mean that water supply is changing in various regions. Droughts, floods, and other weather events are changing the demands put on our water infrastructure.

It sounds counter-intuitive, but successful conservation efforts put a different kind of strain on utilities. They see decreased demand for water (the product that they sell), but still have to pay many of the fixed costs for improving and maintaining the water system in their city. This means that in order to keep up, they have to find ways to raise more money while selling less water.In a fantastic paper that focuses on California’s water system, The Pacific Institute outlines these and other factors in much more detail.

How are water bills calculated?

Utilities are currently using a few different systems to bill customers for water. Across the country, we’re seeing variations on these systems, but they are mostly falling into the following three categories:

Users pay a flat rate regardless of how much water they use. Usually commercial and residential users will have different flat rates. Sometimes flat rates are calculated according to the square footage of a property or some other measure that the utility company uses to predict water use. Anecdotally, we’re seeing fewer and fewer utilities using flat rates.

Most water users expect and understand this model intuitively. Water is priced per 1,000 gallons used. The calculation is pretty simple:
Number of gallons used x price per gallon = water costs
When you use more water, you pay more and your bill increases proportionately to your water usage.

This structure is increasingly popular, especially in areas where utilities are trying to incentivize conservation. The Pacific Institute reported a significant increase in utilities using tiered pricing in California between 1991- 2006. Banyan has seen this system implemented in a few ways:

Increased rate for water past a threshold

Water rates are higher for usage beyond a certain threshold. For example, all users pay the same rate for the first 25,000 gallons of water per month. Those who use 27,000 gallons would pay a higher rate ONLY for the additional 2,000 gallons that they used past the original 25,000 gallons.

Increased rate for all water used if user passes a threshold

The other way that tiered piecing is often implemented is that any user under a usage threshold pays a certain rate. However in this example, a user who crosses into the next tier by using 25,001 gallons of water in a month pays an increased rate for all of their water use. In this case, that user who used 25,001 gallons of water would pay for all of their water at the higher, $2 per 1,000 gallons rate. Moving into the second tier doubles their rate. In some areas the difference between pricing tiers is more than double. In these districts, it is especially important to know where the tiers fall and how close you are to moving into a higher tier.

Differences in billing methods can represent significant water costs. It’s easy to double or triple your water bill with only small fluctuations in use, especially on a tiered pricing model. Take control of your water bills with these tips:

Many property managers are already implementing various methods to reduce water use, but looking more closely at how you are charged for water could provide new reasons to monitor your use more closely. For those with properties in several different locations, understanding the factors contributing to your water bills may help you to decide which properties to focus on for water conservation.