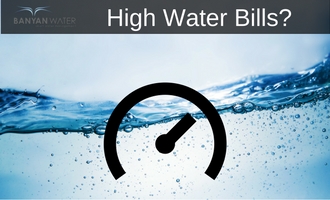 If you have high water bills, you are not alone

It’s summer, and suddenly water bills on your property are shooting up. Of course you’re used to summer water bills being higher than in winter, but do they seem even higher this year? They very well may be. Water rates are increasing across the country. So unless you’re cutting your use, your bills are likely to be on the rise.

The chart below shows a sampling of major U.S. cities and the changes to their water rates just between 2015 and 2016. Cities like Chicago and Boston show no change in rates this year, though both cities’ rates have steadily increased over the past four years. Most other cities show some increase. Overall, Circle of Blue found that water prices rose five percent between 2015 and 2016.

*Numbers based on a family using 400 gallons per day, according to Circle of Blue’s annual survey

Why The Rate Increases?

Aging Infrastructure
The water infrastructure in most U.S. cities needs major repairs and upgrades just to keep functioning, much less to meet newer drinking water standards. Utilities are spending tremendous amounts of money in order to keep their systems working in a way that provides clean, safe drinking water.

According to the American Water Works Association, “restoring existing water systems as they reach the end of their useful lives and expanding them to serve a growing population will cost at least $1 trillion over the next 25 years, if we are to maintain current levels of water service.”  This investment in infrastructure must be paid for, often through rate increases.

Changing Weather – Droughts & Floods
Changing weather patterns are impacting both the availability of water and our needs for it. Major droughts, especially in California and Texas over the past few years have put pressure on utilities, especially in areas where water is more scarce.

Conservation
Declining demand while costs remain steady (or increase) can cause rates to increase. Appliance manufacturers and consumers today are more conscious about their water use and are successfully decreasing use in certain areas. For example, San Francisco residents use less water on average than in many other cities. But the San Francisco water utility still has to pay for expensive infrastructure maintenance and upgrades.

Growing Population
As populations grow and cities expand, so must their water infrastructure. Installing new pipes and adding capacity to provide enough water is expensive to utilities, and therefore, to their customers.

Control Your Use
As is frequently the theme on this blog, saving water is the best way to keep yourself from being hit hard by ever-increasing water prices. Look at a few of our other articles to find easy ways to:

Plan accordingly
You can’t do much to keep water rates down in your city. But you can plan for how those rates will impact your business. Most utilities announce rate changes in advance. Check with your utility(s) to see what rate changes are planned and budget accordingly.

Stay Informed
Water is becoming a topic in more and more conversations about sustainability and the health of businesses. If you want to stay informed about what is happening in the water industry and how it might impact your business, check out some of our favorite water websites. Circle of Blue is an especially great place to get information about water rates and what is impacting them.