Hurricane Harvey unloaded an estimated 27 trillion gallons of rain over Texas and
Louisiana, making it one of the most damaging and costly natural disasters in U.S. history.
Comprehending this unprecedented amount of rainfall is difficult, so much that the National
Weather Service added two new shades of purple to represent the amounts seen in
southeastern Texas as the typical shades of red, orange and yellow did not suffice (C).
One trillion gallons of water alone is equivalent to what flows over Niagara Falls in the
course of 15 days, an amount sufficient to have ended the historic California drought twice
over. And an excellent visualization by Vox shows what 27 trillion gallons of rain might look like
as a single drop (A). 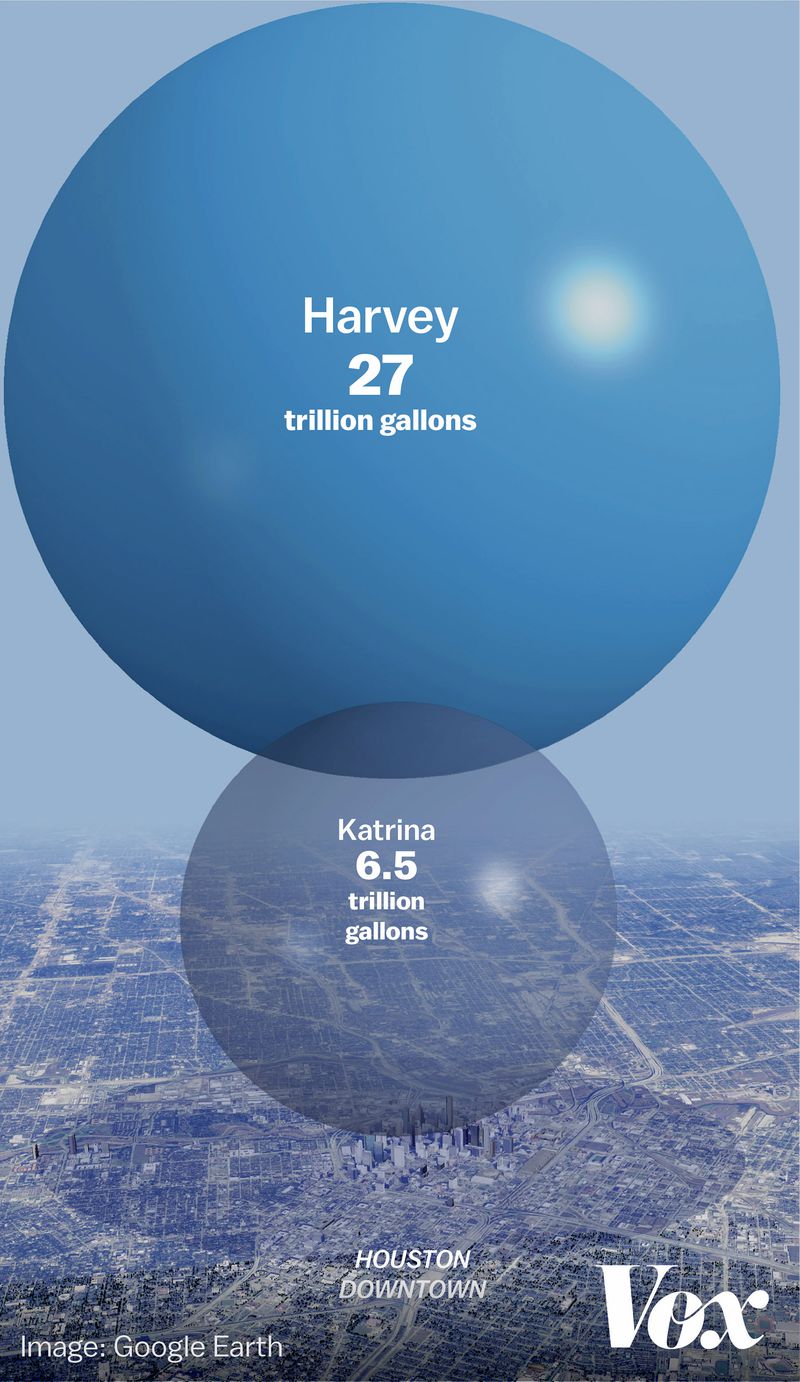 While no amount of planning can completely prevent or efficiently handle a disaster like
Harvey, experts in floodplain and stormwater management say its damage could have been
lessened if urban sprawl, zoning, and reservoir and land management were better planned.
Houston is a low-lying city in a coastal floodplain and in need of protective zoning policies. The
policies that existed were not properly enforced, allowing commercial development, residential
neighborhoods and thousands of square miles of paved area to flourish. The result is incapacity
for adequate drainage, developments that are perpetually susceptible to flooding, and even
residential neighborhoods and businesses being built within the path of water flow from
controlled dam releases.

Houston, alongside hundreds of communities identified by the Union of Concerned
Scientists’ (UCS) national analysis (D), faces a risk of chronic inundation. While there are varying
degrees of vulnerability to these “never seen before” environmental events, sea level rise and
climate change are indisputable threats to our livelihoods and can transform a city into an
inland sea in just a few days. This issue requires our immediate attention.
Averting climate change will be less expensive than responding to it, particularly as the
frequency of such events—including Hurricane Irma and South Asia’s recent monsoon
event—increases. UCS advises that three categories of policy response are critical: enhancing
existing policy frameworks, halting and/or phasing out current policies that perpetuate risky
coastal development, and creating bold new policies and measures that are adequate for the
scale of coastal risks. These steps prepare community leaders to understand and mitigate risk,
assess choices and implement adaptation plans. We are at a crossroads where we must
proactively—not reactively—manage climate change. Let’s get to work.

About the Author: Banyan Water